6 lessons of power you can learn from Daenerys Targaryen The Mother of Dragons is truly a force to be reckoned with and one of the strongest female fictional characters on TV who inspires nothing but absolute awe. I’m sure she felt relatable and someone we could connect with in her journey full of ups and downs in the world of Westeros.

That said, there’s so much you can learn from her, regardless of whether you’re a woman or a man–valuable life lessons, especially ones of personal power. Our Khaleesi is truly an epitome of an inspiring and influential leader who can teach us a thing or two on how to be the king or queen of our life situations in the 21st century.

Although it goes without saying, to make sure to not let power get to your head, and consume you – as happened to Daenerys in the end of Game Of Thrones.. I think we can all agree that part shouldn’t have happened.

Here are some lessons I feel we all can adapt from the Breaker of Chains:

1. You can’t control your birth or death, but you definitely have a choice in what you do with the in-between

From the weak and meek 16-year old exiled princess to one of the most powerful rulers in the whole of Westeros, we have witnessed Daenerys evolve into her majestic might. She achieved all this purely through her sheer will and wit. No matter what cards you’re dealt in your life, you always have the possibility of turning it all around, if you’re willing to do so.

2. Empathy, compassion, and emotional intelligence are key to influence

In one of my most favourite scenes with Khaleesi of the Great Grass Sea, she was successful in earning the loyalty rather than acquiring the formidable army of ten thousand unsullied without really seeking their obedience. She showed empathy and compassion to them, freeing them of any servitude whatsoever and instead giving them the choice of staying or leaving of their own accord. They chose to serve her regardless and truly accepted her as their commander, not as a master entitled to their bondage.

3. Believe in yourself even if no one else does

Despite everyone else suggesting otherwise, Daenerys went to her husband’s pyre with three petrified century-old dragon eggs and yet emerged unharmed with three baby dragons, because she believed she was a true Targaryen and the Mother of Dragons, and hence couldn’t be burned.

4. Don’t shy away from using your dragons–unfair advantages

Identify your unique skills and unfair advantages and utilise them to their full potential. There will be people along the way who will try their best to mislead you or exploit your talents, but learn how to navigate through all this and come out a winner, or shall I say a conqueror? Own your uniqueness and be proud of your identity.

5. Let them underestimate you and emerge as an underdog

I still clearly remember the time when the small council in King’s Landing discussed the ‘Targaryen girl’ far across the narrow sea and deeming her a child half-way across the world–someone not worth spending a dime’s worth of mind on. Later on she not only became one of the most powerful rulers in Westeros, but she also conquered several key cities and states along the way, including King’s Landing.

6. You don’t need to be masculine to command power

Did you notice that even after being one of the strongest commanders of one of the biggest armies in Westeros, Dany never lifted a sword or donned an armour to lead her troops or fight head-on–even once. You could always see her wear her distinctive flowing robes. Her femininity and wisdom gave her strength, and of course brought forth her ferocity and vigour. We often make the mistake of equating femininity with weakness. On the contrary, it exudes strength and vitality. Accept and celebrate your femininity.

I hope this article is of some help to you if you’re seeking some motivation or inspiration in your life. Take charge of the reins of your life and lead it the way you want to. You can check this blog post to know how you can empower yourself and other women too. You might also want to check how you can use emotional intelligence to advance in your career as a woman. See you on the next blog. 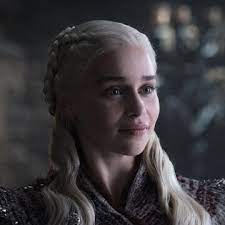