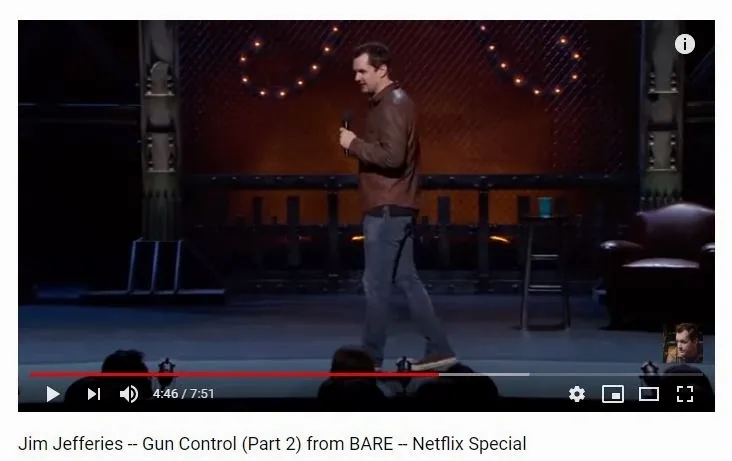 Now it may be a controversial topic to some – and some (surely a small few!) people in America who may read my blog may see it as being quite opinionated.. But surely Anyone who knows Anything about Anything knows that gun control laws in the US need to be reformed.

The ‘second amendment’ in the United States constitution, clearly needs to be amended. With mass shooting after mass shooting, many innocent people are being killed. Although mass shootings account for only a tiny proportion of gun deaths in the US. Every year, tens of thousands of people in The United States of America die as a result of gun use.

While it is such a serious issue that needs to be addressed, maybe some progress towards gun control law reform can be made through comedy. At least it’s worth a try!

Stand-up comedian Jim Jefferies has some great points on Gun Control, and I couldn’t help but share these funny clips. Here Jefferies is in front of an American audience, and surely has all the people in the audience realising how archaic their gun laws are!

I love Stand-up comedy, and I think there aren’t too many topics that are off limits.

After all, why not laugh?

All jokes aside though, I remain optimistic that the US will eventually have tighter gun laws, that make their country safer for everyone. I believe the people will eventually persuade the government (not the current government, but hopefully the next one!) to change the laws, as laws around gun control in the US were formed in the year 1791… A very different world to the one we live in now!

In 1996 after the Port Arthur massacre, the Australian government tightened gun laws in Australia, for the better. It was a very smart move.

How many more massacres before the US government realises that these deaths need not continue? One massacre is too many.

In the meantime, check out Jim Jefferies.