I’ve never really understood why so many people are so bashful about sex.

Sometimes it’s almost as if talking about sex is a taboo subject. Some people use euphemisms or slang words to describe those parts of our anatomies which we were all born with. Other people go all coy when the topic of sex comes up in a conversation; some avert their gaze and maybe even have a slight flush of embarrassment in their cheeks.

Sex has always been something that some people talk about, some people don’t talk about.. I think sex is a private thing, to be cherished. And no one has to talk about it if they dont want to.. But I think it is important to talk about sex with your partner. Whether you are in a relationship, or seeing someone that you aren’t in a relationship with, whatever your situation.. If you and your partner both talk about what you like, what you don’t like.. What, when, and where you feel like doing something… Communication is the key, and it will help your relationship, or partnership, blossom!!

In any event, sexual acts and the reproduction processes are, without doubt, a fundamental part of human life; they are something we are born to do; the desire for sex is inbuilt—admittedly though to varying degrees. And one could be surprised by the range of sexual options, fetishes, demands and so on available for anyone who wants them. The human imagination when it comes to new ways to package the sex act(s) is, quite simply, amazing.

With such huge diversity in the nature of people in this human race of ours, it stands to reason that there has to be uncountable tastes and likes and dislikes amongst the general population.

Yet, even within the parameters of normal sex, certain aspects are still relatively stigmatised—especially for some women.

Unfortunately, many women are brought up to think that oral sex is “not appropriate” or “unclean”. The thinking and attitudes of past generations are still clouding the views of the more liberated, younger ones.

Sure, to be fair, receiving oral sex is not for every woman. However, once many women come to realise that her lover can reach parts of her genitals or stimulate areas that a penis cannot, they often wonder why they have waited so long to experience such anexperience!

A skilled lover who knows exactly where the erogenous zones are around a women’s vagina and clitoris areas can often bring his lady to a mind shattering climax—without even bringing his own organ into play!

A skilled lover can caress the women’s clitoris with his tongue; he can use his teeth to gently…. hmm, I think you get the drift, let’s stop there…. this is not an x-rated blog!

So, next time you have a special request or would like to try something new, don’t be shy… just ask me—and I’ll see what I can do to oblige 🙂 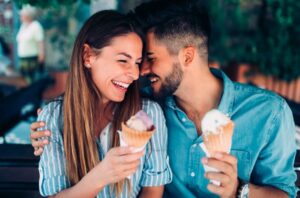